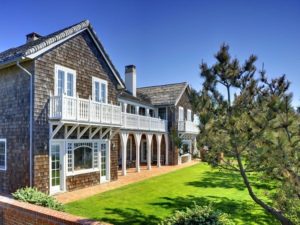 The property is owned by real estate mogul Elie Hirschfeld

(SOTHEBY’S INTERNATIONAL REALTY)
The landmarked home, designed and built by John Custis Lawrence in 1920, was renovated in 2002 and has a game room, a formal dining room, a library, six fireplaces and a heated pool. There’s even a path leading directly down to the beach.

Bill Clinton reorganized the library by subject matter during his first stay at the property, much to Hirschfeld’s surprise, and worked in the dining room on his book, “Back to Work.” Hillary, who was then Secretary of State, took over the study.

Hirschfeld, who recently remarried, said he was selling the property so that he and his new wife, Sarah Schlesinger, could find a new place to design together.

The property certainly has a top notch location. Lily Pond Lane is well-known address for its celebrity homeowners, who have included Steven Spielberg, Martha Stewart and Jon Bon Jovi.

But the Clintons have recently moved on to a new Hamptons rental, a $50,000 a week home owned by Republican art collector Andre Nasser at 44 Broadview Road — a hidden cul-de-sac in Amagansett.