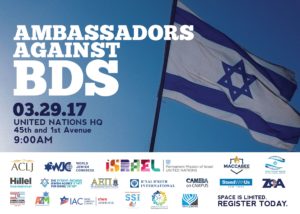 In March 2017 Elie Hirschfeld and his wife Sarah we were invited to the home of Israel Ambassador to the U.N. Danny Danon, a neighbor and friend. There, they attended a reception with Nikki Haley. Elie Hirschfeld said, “There is no cause more important to me than Israel’s long-term vitality, security and sovereignty and I am proud to be a supporter of this mission and those driving it forward.”

The company he keeps, reveals some of the most important and highly valued causes, Elie Hirschfeld supports – social justice, economic prosperity, health and culture and Israeli international relations.

In May 2015 Mr. Danon was appointed Minister of Science, Technology, and Space, serving until his appointment in August 2015 as Israel Ambassador to the United Nations.

Elie Hirschfeld strongly supports Danon and Haley, who spoke forcefully about the importance of efforts to change the tone at the United Nations, and the need to continually strive for awareness of issues surrounding BDS, and support world leaders in the United States, Israel and beyond.