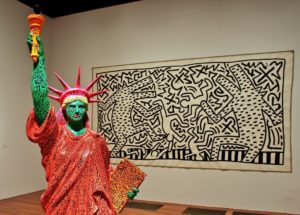 Over time, he came to be known for his distinctive style using bold, heavy lines, simple shapes and figures, and bright colors. In the ’80s, Haring gained international recognition, but he never stopped giving back to the community, creating many public murals around the world.

He drew on the techniques and locales of street-based art such as graffiti and murals, employed bright and artificial colors, and kept imagery accessible in order to grab the eyes and minds of viewers and get them both to enjoy themselves and to engage with important concerns.

Elie Hirschfeld says, “Keith Haring unifies many layers of New York City’s culture – both the refined and gritty, the cultivated, edified and self-taught. The energy carried through his artwork is unmatched. Sarah and I will always treasure the work of Keith Haring that we recently added to our collection.”