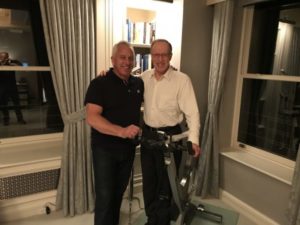 The two first met when Hirschfeld, 67, competed in the 1995 World Ironman Triathlon in Hawaii where LeMond served as a commentator for NBC.

Today, Hirschfeld is still competing and winning among his age group in triathlons and LeMond is breaking new barriers in sports technology.

“Greg is the epitomy of excellence — not only in sports, but in technology and humanity,” said Hirschfeld.